The meeting of the Group of Strategic Vision "Russia-Islamic World" presented the new Secretary-General of the Organization of Islamic Cooperation, Hussein Ibrahim Taha of the Republic of Chad. He succeeded his predecessor Yousef Al-Othaimeen. In recognition and gratitude for the work done in the development and harmonization of relations between Russia and the Islamic world, Russia's Permanent Representative to the OIC, Ramazan Abdulatipov, handed the former Secretary-General of the organization a badge of the Russian Foreign Ministry "For Contribution to International Cooperation." 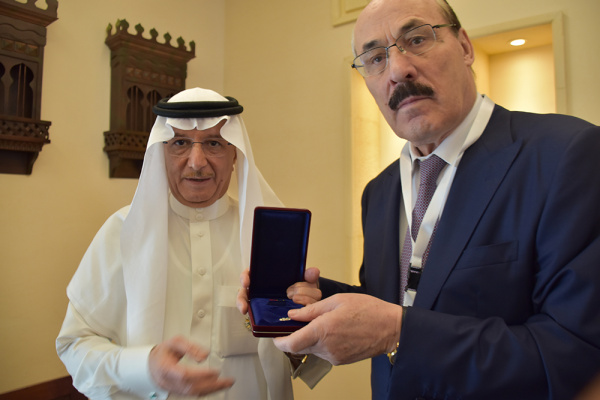 "It has been very comfortable for us to work with you over these years. I rightfully consider you one of the outstanding figures of Saudi Arabia and international politics in general. I hope our close ties will not be interrupted. Remember you have friends in Russia. With all our heart, we wish you good luck in your new post," said Abdulatipov, solemnly presenting Al-Othaimeen with his badge.

In turn, Yousef Al-Othaimeen said the words of gratitude for the work done jointly and expressed hope for further fruitful cooperation between Russia and the Organization of Islamic Cooperation. According to him, balance, peace and harmony in society is a fragile thing that needs constant support. "I sincerely hope that Ibrahim Taha will continue, as the new OIC Secretary-General, bilateral cooperation with Russia for the benefit of the whole society," added Yousef Al-Othaimeen.

Yousef Al-Othaimeen graduated from the Department of Sociology and Social Services at King Saud University in Saudi Arabia in 1976, and then in 1982 received his master's degree from Ohio University in the United States, also in sociology. In 1986 he received his PhD in Social Protection.

He worked as a lecturer at King Saud University before being appointed advisor to the Ministry of Labor and Social Security. He later became head of the agency and held the ministerial post until December 2014. A few days ago, he resigned after the regular elections of the Secretary-General of the Organization of Islamic Cooperation.