On July, 11, Deputy Chairman of the Group of Strategic Vision “Russia – Islamic World” Farit Mukhametshin met with Secretary General of the World Council of Muslim Communities Muhammad Al-Bishari, who was on a visit to Moscow.

In the course of the meeting, the parties discussed prospects of the cooperation between the World Council of Muslim Communities and the Strategic Vision Group. Farit Mukhametshin informed the foreign guest about the activities of the Group, which includes well-known state and public figures from the Russian Federation and 27 Muslim states.

“This organization enables to trigger the mechanism of public diplomacy, which helps to bring our countries closer together”, Farit Mukhametshin, who is also Deputy Chairman of the Committee of the Federation Council on International Affairs, said. 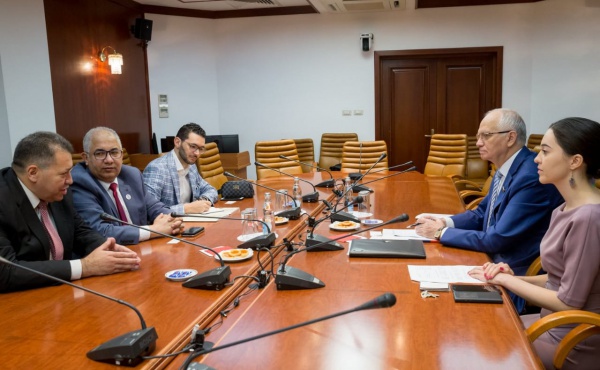 The Senator highlighted that at regular meetings held within the framework of the Group, topical issues of international policy, the situation in the Middle East and prospects of the cooperation between Russia and the countries of the Islamic World were discussed. In addition to it, Farit Mukhametshin pointed out the importance of expanding ties between Russian parliamentarians and their colleagues from Muslim countries.

For his part, Muhammad Al-Bishari said that the World Council of Muslim Communities intended to organize the World Forum of Muslim Parliamentarians from non-Muslim states, where the number of people who practiced Islam prevailed, in 2020 to exchange experience of peaceful inter-religious co-existence. He invited Russian legislators to take part in the event.

The parties agreed to create the working group to prepare proposals in order to hold various joint events on topical issues of the cooperation between Russia and states of the Islamic World in the future: international conferences and meetings, organizations of summer camps for the youth and students from Russia and Islamic countries.

Continuation of the discussion and definition of further plans regarding the cooperation between the parties have been scheduled for September of the year 2019.