Every nation, the inhabitants of any country in every corner of the planet have sacred places that occupy a special place in the life and history of the population. These can be monuments of cultural heritage, places associated with significant political events, natural landscapes, religious shrines. Right here, in places of power, that a person feels a burst of energy, his soul is renewed, and his heart is filled with peace. There are such sacred places in Kazakhstan. About what these places are, what they are known for and how to get to them, read this piece. 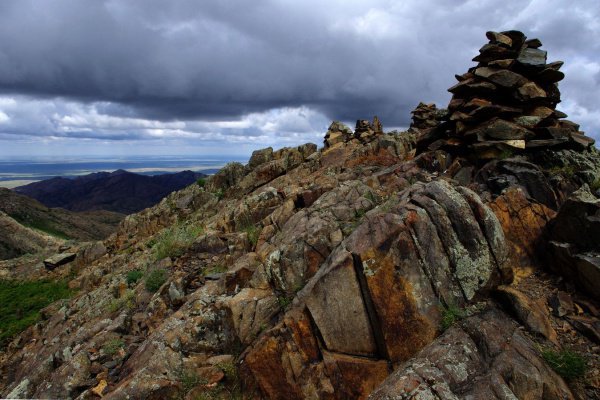 It is about the top of the Ulytau mountains. "Ulytau" from the Kazakh language is translated as "the great mountain", "big mountain". But since these mountains themselves are in fact not very high, this name most likely conceals in itself a sacred meaning, since these mountains are “the main revered mountains” in which the shrines of nomads have been hidden from ancient times. It is here that the ancient tombs are located. According to legend, Zarathustra was born in these mountains, and in the Middle Ages Zhoshy Khan, Alasha Khan, Tokhtamysh Khan, Yedyge and other prominent ancestors of the Kazakh people were buried here. These sacred mountains are carriers of ethnic memory and grandeur. In the history of the Kazakh people and early Turkcs tribes - these mountains played an important role. Associated with them is the ancient legend of the six Alash tribes - the supposed ancestors of the Kazakhs.

The history of the formation of the Kazakh people and the formation of a single Kazakh people can not be separated from the history of these places. These mountains are witnesses and participants of all the most important stages of the Kazakhs history. Perhaps that is why the people respectfully called them Ulytau - “Great Mountains”. Within a radius of 40–60 km from the sacred summit of the Ulytau massif - Mount Auliyetau - there are 9 khan stays. If you delve into the folklore of local people, you can learn that the Ulytau mountains are not only the highest point of Western Sary-Arka, but also its navel, the point where the creation has its beginning - the root, "center of the world." According to legend, the peak is located closest to the sky, it is there that Heaven and Earth meet, therefore, since ancient times the mountain was considered a sacred place, the abode of God and spirits, a place of permanently operating sacred forces, a place of ritual behavior, human connection with nature.

The ancient inhabitants of Ulytau sacralized this place for certain reasons, which they understand at the level of deep subconscious thinking. As a rule, this place acted according to its ritual laws from ancient times. Once having chosen this place for worship, people throughout many centuries came to it to perform their rites. This tradition continues to this day.

Yedyge peak is located 35 km west of the village of Ulytau. At its top is the burial place of the famous Khan of the Golden Horde Tokhtamysh. At the top of the sacred Ulytau, the esteemed Edyge bi, whose name later became known as the mountain, was interred. He was a contemporary of Khan Tokhtamysh, who ruled the Golden Horde in 1380–1395, the cities of Sauran and Syganak were considered the central cities. Having united with Tokhtamysh, they conquered lands from the Volga and the Urals and became the founders of the Nogai Horde. From 1396 they ruled the Golden Horde and strengthened the Nogai Horde.

In the folk tales of the Kazakhs, Karakalpaks and Bashkirs, the name Yedyge is found as the name of the founder of the Nogai Horde. In the “years of troubles” (1410–1412) in the Golden Horde, Edyge lost power. It again passed to the sons of Tokhtamysh. In 1419, under Shed, Edyge was killed by the son of Tokhtamysh Kadyrberdy. The body of Yedyge was buried in the Ulytau mountains, setting a tombstone over the grave. Since then, the places “Mount Yedyge” and “Grave Yedyge” have appeared here. The birthplace of Yedyge itself is the area of Ulytau, namely Kishitau (Lesser Mountain). His mission is to be a leader and manager - manifested itself even in adolescence. From the legends that have come down to us, one can understand and see his courage and bravery, intelligence and vision. He was not afraid to tell the truth to the khan, he was a true leader, orator, sage, therefore he was always spoken of as a great hero. In oral folk art there are such lines:

“Yedіge degen er eken, Eldіn kamyn zher eken. Yel shetіne zhau kelse, men barayin der eken" - "There is a batyr Yedyge who always takes care of his people. If the enemy comes, he will go first to defend his homeland”.

Many centuries ago, historical events unfolded under the shade of Ulytau, which later became turning points in the history of the Kazakh people: here, on the white carpet, the Khans proclaimed were raised and the Khan Ordas settled here. In Ulytau, according to the legend, he found the land of dreams - Zheruyik - the famous narrator Asan Kaigy. The rebellious souls of the rulers of the Golden Horde, Tokhtamysh and Yedyge biya, rest in peace in the Ulytau mountains, whose names and deeds are mentioned in the epics of the peoples of Altai, the Urals, the North Caucasus, the Crimea, Uzbekistan. The Kazakhs are well known for the epic poems “Tokhtamysh” and “Yedige”, which are included in the cycle-book of the outstanding steppe singer-narrator Muryn-zhyrau (died in 1949) “Forty Batyrs of Crimea”. The Russian ethnographer Grigori Potanin, who collected folk tales about Yedyge, noted that during his reign the people lived in prosperity and wealth. According to Alkey Margulan, much about Yedyge can be learned from the writings of the Arabic writer Ibn Arabshoh. In particular, that his descendants lived in Kumkent. 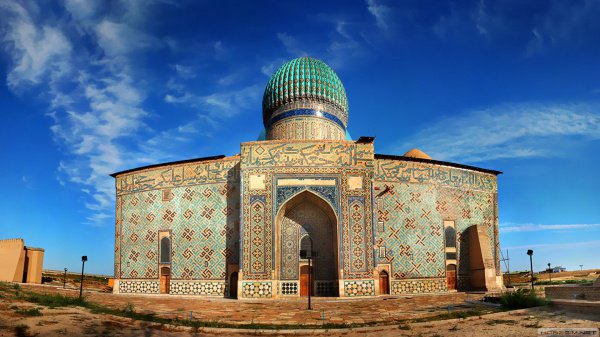 Khoja Ahmed Yasawi was a great scholar of Turkic peoples, a poet, a philosopher and a preacher who lived in ancient Turkestan, which in those years was called Yasi. In his sermons, he called upon Muslims for patience and decried attachment to worldly goods.

After the death of Yasawi, a number of buildings appeared around the venerated place, connected with the name of the enlightener. The mausoleum itself became an architectural complex, which combines the functions of a mausoleum, a mosque, a khanaka (monastery), administrative and economic premises, and is a magnificent ensemble of palaces and temples. One of the largest erected in the Timurid era.

The memorial, which became a place of pilgrimage in the twelfth century, today is one of the main shrines of the Muslim world and the most visited temple in Central Asia. In the Turkic world, Yasawi is especially revered and is considered one of the most significant enlighteners and adherents of Islam. 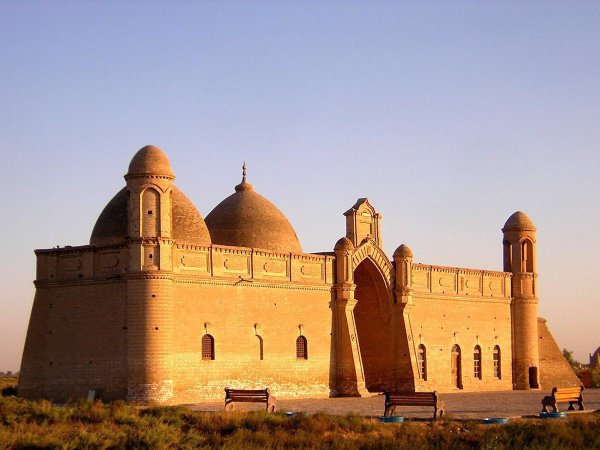 According to the legends, having lived for hundreds of years, Arystan-Baba studied the foundations of thirty-three religions and, having recognized Islam as the faithful, became one of the most faithful companions of the Prophet Muhammad himself. Famed for his courage in the battles for the faith, he got his nickname - Leo (Arystan).

Heading to Turkestan, the pilgrim will make a detour through the mausoleum of the teacher and spiritual mentor Ahmed Yasawi Arystan-Baba. The mausoleum at the tomb of the teacher and spiritual guide Khoja Ahmed Yasawi of the religious preacher Arystan-Baba is a tomb and a memorial mosque and is a place of pilgrimage for Muslims.

According to the legend, Arystan-Baba died and was buried in the vicinity of Otyrar in the XII century. Probably at the same time was laid mausoleum. In the 14th century, on the orders of Timur, a new building was erected on the site of a collapsed building, which, like the Sairam mausoleums, was rebuilt and restored several times.

Today this monument is XII-XX centuries. It is the second most important historical and architectural monument of South Kazakhstan after the mausoleum of Yasawi and one of the Muslim shrines of Central Asia. There is a pilgrimage center and a hotel here. Near the mausoleum there is a well with very salty water which has healing properties. 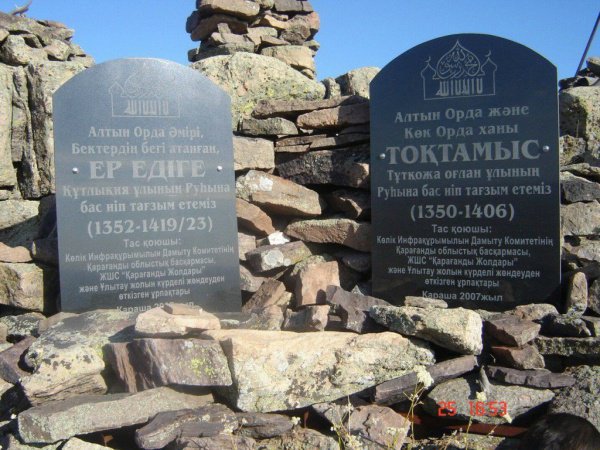 Altyn Shoky (“Golden peak”) is the name of the Ulytau mountain range in the Karaganda region whose history is associated with the Great Tamerlane (1336–1405). During the campaign against Khan of the Golden Horde Tokhtamysh, Tamerlane ordered to install a huge stone monument at the Altyn peak. Legend has the following: in April 1391, during a campaign against the Khan of the Golden Horde Tokhtamysh, Tamerlan with 200,000 troops stopped at the foot of Ulytau mountain, in the heart of Saryarka. The path of the troops of the ruler of Maverannahr went through the desert Betpak-Dala. And here, on the estate of Khan Zhosy, a completely different nature revealed the gaze: mountain air and cool rivers, lush pastures and fields. Realizing that the army needed to gain strength, it was decided to stay in the area for several days. Admired by the nature of the Ulytau region, Tamerlan ordered, in gratitude, to erect a stone monument on which it was noted that he had stayed with his army here.

Information about this historical event became known only six centuries later. The stone installed by the great ruler Tamerlane was discovered in 1935 by a well-known Kazakh geological scientist, the first academician of the Academy of Sciences of the Kazakh SSR, Kanysh Satpayev, during an expedition to Central Kazakhstan. A stone statue representing a fragment of a huge rock was found in the Akshoky area of the Ulytau region. In 1941, Satpayev published an article entitled “Prehistoric Monuments in the Dzhezkazgan District”, which in 1989 was included in the collection “Selected Articles on Science and Culture” of the «Nauka» publishing house.

It is noted: "According to Yazdi, Timur "climbed to the top of the Ulytau Mountains and for a long time enjoyed the view of the surrounding steppe which was covered with beautiful greenery from one end to the other". Timur spent the whole day here and “ordered the troops to bring stones and built a large pyramid here, on which skilled craftsmen carved the date of this happy event in order to preserve his memory for many years.” The monument is located on the northwestern slopes of the Ulytau Mountains, 90 km west of the Zhezkazgan-Arkalyk road and 80 km west of the village of Sayat. Its height is 50 m. Most of all, in Altyn Shocks, a pile of stones raised in the shape of a cut-down pyramid is raised on its top.

Tamerlane ordered the 200,000-strong army to lift one stone to the top of the mountain, build a smelting furnace, chop shrubs by a nearby river, start a fire and melt meteorite stones. All this was done in order to leave a memorable inscription which is similar to the modern Kazakh language: “The history of the seven hundred and ninetieth year of the Sheep. Summer month July. Sultan Turan Temirbek sent with his 200-thousandth army to war with Khan Tokhtamysh.

Despite the discovery of this historical fact, the composition of the inscription material has not yet been disclosed. This artifact is in the St. Petersburg Museum. Previously, the stove was located above a huge pit, where there was a brick kiln. An exact copy of the stone with this inscription of the Emir is installed on top of Altyn Shoky. 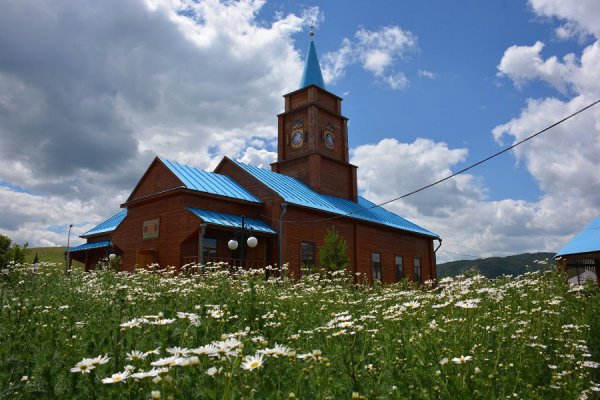 In 1853, the mosque was opened to Muslims but in Soviet times it was partially destroyed and was used for other purposes. At one time even a stable was located here... Today it has been restored and all the believers are also kept under its shelter.