Karim Hakimov – «Red Pasha» and the Arabian Vizier of the Kremlin

The most influential persons in diplomatic history

The Arabian Vizier of the Kremlin,  «Red Pasha»…

This person has done too much in order to facilitate diplomatic ties between the Soviet Union and the Arab-Persian world. The diplomat was so appreciated in the Muslim world that after his resignation all the contacts with the USSR were terminated. They were resumed only after the imperia’s fall. Today we will talk about Karim Khakimov.

Karim Abdraufovitch Khakimov is a soviet diplomat, the first plenipotentiary representative of the soviet Russia in Arab countries, who has made a significant contribution to the establishment of good relations between the young Soviet Republic and the Arab-Persian world. The future diplomat was brought up in a Muslim family. One should mention the fact that he used to be a professional revolutionary, a Red Army officer and a member of the soviet government. Khakimov was directly involved in the formation of the new Saudi state.

He became a personal friend to the head-founder of the ruling dynasty, Abdulaziz ibn Saud, and earned the trust of inhabitants of the Arabian Peninsula. During the establishment of diplomatic relations between the USSR and Arab countries, Karim Khakimov supplied vital goods, products from the USSR to the locals and provided them with the medical assistance. In 1918 he became a member of the Orenburg Muslim Military Revolutionary Committee. He began working in the diplomatic sphere in 1920 when he was accepted to the People’s Commissariat for Foreign Affairs on the recommendation of Kuibishev.

His activities aimed at the establishment of the close cooperation between the soviet government and the Arab world began exactly from this year. Until 1920 Karim Khakimov was a deputy chief in the administration of Turkistan front line. In parallel, he held the position of a secretary in the Provisional Central Committee of the Communist Party of Turkistan, a plenipotentiary representative of the RSFSR in the Bukharan People’s Republic and a secretary of the Central Committee of the Bukharan Communist Party. The next three years he continued working as a Consul General of the RSFSR/USSR in cities Mashhad, Rasht (Persia). 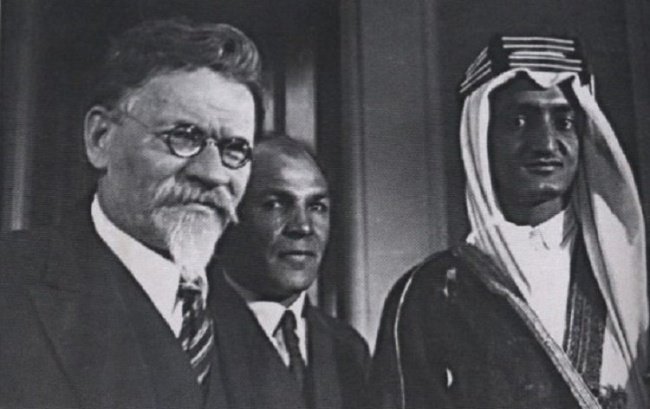 Kalinin is welcoming Abdulaziz. Hakimov is in the background, 1932. Stalin did not welcome Abdulaziz. The Arabian Sheikh was very upset but thanks to Khakimov that incident did not have any consequences.

Over the years of his work the soviet diplomat supplies essential goods to Jeddah by sea, takes part in the organization of a film expedition that was led by the founder and the first presenter of the legendary TV show «Travelers’ Club», Shneiderov. Later there was released a number of documentaries about Yemen which were based on the results of the expedition.

In 1936 Khakimov became a plenipotentiary representative of the USSR in Saudi Arabia. Unfortunately, it was the last post of the diplomat: one year later he was recalled to Moscow where he was arrested one year later on the false denunciation. On the 10th of January in 1938 Red Pasha was cut short. Repressions of «Red Pasha» and the follow-up execution made a great impression on representatives of the ruling till now dynasty of the Saudi Arabia Kingdom – diplomatic relations between that country and the USSR were broken off in 1938 after Khakimov’s withdrawal and they were not resumed till the fall of the communist system in the Soviet Union. Karim Khakimov’s colleagues say the following about his activities: «During his diplomatic mission K.A.Khakimov established good relations with the founder of Saudi ruling dynasty, Abdulaziz ibn Saud, and enjoyed his favour. Among Arab elites and common people he was famous as «Red Pasha», - Abdulaziz ibn Saud. 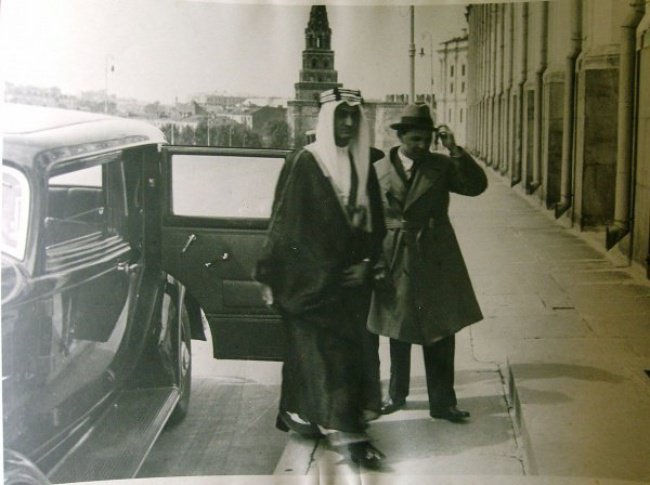 The part from the recommendation of a member of the Central Committee of the C.P.S.U. (B), V. Kuybishev, when assigning diplomatic work to K. Khakimov: «He was the most communist and alien to nationalistic deviation among Muslim workers». G.V. Chicherin, a member of the People’s Commissariat for Foreign Affairs of the USSR, in his letter of 19 July 1925 to Khakimov assessed the plenipotentiary representative’s visit to Mecca for acquaintance with ibn Saud in the following way: «Your so well-organized visit to Mecca has greatly enriched our information about ibn Saud’s real position and his intentions…», Chicherin wrote.

From the king of Hejaz, Najd and the attached areas, Abdulaziz ibn Saud’s letter, dated 26th day of the 6th month 1347 A.H., to the Chair of the Bureau of the Central Executive Committee of the USSR, M.I.Kalinin: «We take this opportunity in order to express our pleasure in connection with those efforts which were made by His Excellency Agent for strengthening good relations and friendship between the two countries. These efforts have left an amazing impression».

In 1990 an ambassador of the USSR in the Yemen Arab Republic, V.V. Popov, describing K.A. Khakimov’s work in Arabia, wrote the following:

«It is hard to overestimate what this person as a diplomat, as a representative of our country, has done. Exactly as a result largely of his personal contribution there was laid the groundwork for the relations between the young soviet state and the Arab world…Due to deep knowledge of History, traditions, customs of Arabs, his extraordinary tact and his ability to attract people, Khakimov was highly respected among Yemeni and Saudi people…He spoke Arabic perfectly, even Arabs were amazed by his ability to speak his mind in such a deep, ornate and “Arabic” way. It is pleasure to read the documents written by him: they are so literate, so professional and the language is so rich and expressive. He was welcomed in palaces and in shacks of the poor. His house was always full of guests – merchants, the royal family members and ordinary people visited him».