https://russia-islworld.ru/bx8/
Islam in Russia Muslims of Russia Mosques of Russia

Among about 8 000 mosques, there are five of the oldest ones, which not only managed to survive the difficult periods of Russian history, but even today welcome worshippers within their walls. It may seem surprising that several centuries ago in various Russian cities there had been already mosques open for worshippers wishing to kneel in prayer. But if we refer to historical sources, we will find out that Islam emerged in the territory of Russia in the middle of the VII century. This makes it possible to call Russia home for Muslims, who make up about 20% of the total population of the country.

Today we invite you to learn a little about the oldest Russian mosques.

1. Cathedral Mosque in the Village of Nizhnyaya Bereske 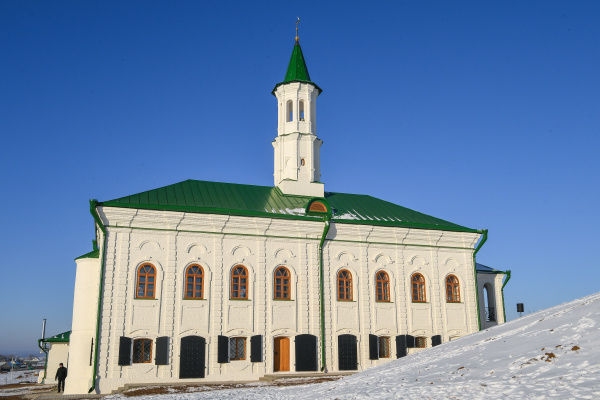 Just last year, 2020, in the village of Nizhnyaya Bereske in the Atninsky district, perhaps the oldest stone mosque in the territory of modern Tatarstan was restored. The Muslim temple was built in 1769, which is a year earlier than Al Marjani, the first stone mosque in Kazan.

According to historical information, the initiator of the mosque construction was Ibrahim Burnaev, a village patron, who personally petitioned the Empress to build the mosque. By the way, there was a leather factory in the village and a textile factory on the bank of the Ashit River, both of which belonged to him.

What is the Cathedral Mosque in Nizhnyaya Bereske like? This is a two-storey building, with only two halls inside and a minaret on the roof. Unfortunately, it has not survived to this day; therefore, a new one was erected during the restoration works. The mosque was designed in the style of the Petrine Baroque and is located in the very center of the village on the open picturesque plot. The upper part of the windows on the ground floor had a slightly curved shape, while the windows of the first floor were made in the form of high arches, which were bordered with platbands characteristic of the Petrine Baroque.

The ground floor was traditionally occupied by warehouses, shops and other utility premises (there is a museum here today). On the first floor, however, there was a vestibule and two prayer halls, separated by a thick transverse wall. It was the very wall that supported the minaret, which was destroyed during the years of atheist policy.

During the Soviet time, the Muslim temple served as a village club. In 1933, the village residents built a wooden mosque instead, and the historical building was returned to the Muslim community only in 2010, when the village club received a new building.

Five years later, in 2015, an examination of the building was conducted. It stated that the mosque in the village of Nizhnyaya Bereske was a unique example of architecture, the first brick building constructed by Tatars after a 200-year hiatus. At the same time, a restoration project was prepared and an aid fund was established. The restoration works began in 2018, and in July 2020 a crescent was already towering over the building. During this time, a great deal of work had been done: the load-bearing structures were strengthened, the entrance and Soviet period annexes were dismantled, the ceiling of the main prayer hall was raised, the minaret was recreated, and roofing and façade work was carried out. The work was supervised by the Fund for Support of Cultural Development under the President of the Republic of Tatarstan at the initiative of Asgat Safarov, Chairman of the Board of the Fund, Chief of Staff of the President of the Republic of Tatarstan. 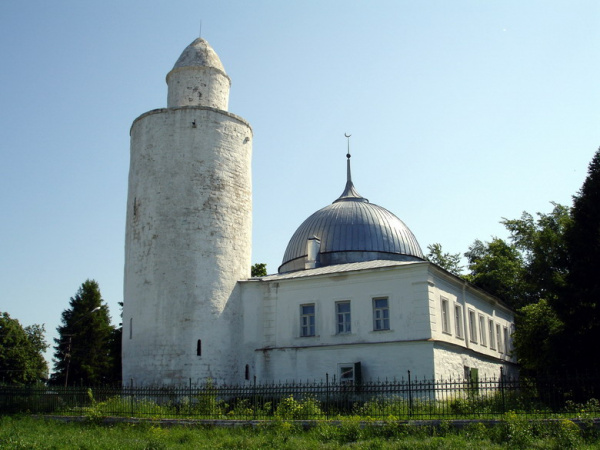 At the highest point of Kasimov, there rises a snow-white minaret and an ancient mosque. They have been standing here since the days of the Kasimov Khanate.

Some researchers believe are convinced that the first mosque in Kasimov was erected as early as the XV century by Tsarevich Yakub and Kasim. The others believe that the Muslim temple was built much later – during the reign of Khan Shakh Ali. It is noteworthy that in the middle of the XVI century it was the only stone mosque in the territory of Rus’.

According to legend, in 1702, Russian Tsar Peter the Great arrived in Kasimov down the Oka River. When he saw a high building on a hillside, he thought it was an Orthodox church and crossed himself. When the Tsar discovered that there was a mosque in front of him, he ordered it to be demolished. The minaret was left untouched. For a long time, it served as a watchtower.

Empress Catherine II issued a special decree, thanks to which a new mosque was erected next to the old minaret. The construction was supervised by a sotnik (a military rank) of the Tatar Sloboda, and in 1768 a new mosque was built for the Kasimov Tatars. Right until 1835, it was a one-storey building, but later another storey was constructed.

Shortly after the revolution, the Muslim temple was closed for worshippers, and since 1938 the local history museum of Kasimov was located inside the building. In the 2000s the museum’s main exposition was moved to the Alyanchikov house on Sobornaya Square, and materials concerning the history of the Kasimov Tatars were kept in Muslim buildings.

In 2013, the mosque was returned to the worshippers. Today, the complex includes a two-storey building of the mosque itself, a tall minaret and the mausoleum of Khan Shakh Ali. On the wall of the mosque, above the door, there is a text written in the old Tatar language. It lists the names of distinguished Tatars of the city, who took part in the construction of the mosque in the second half of the XVIII century. 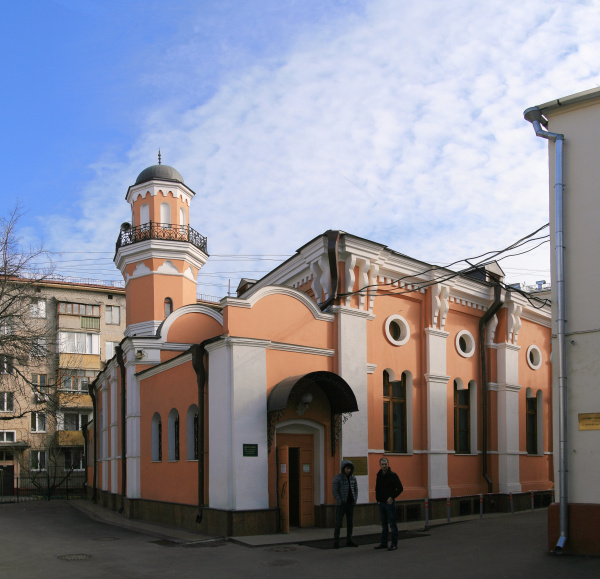 This is the oldest mosque in Moscow, which was founded back in 1744. After the epidemic of plague killed most of the congregation, the mosque building was purchased by merchant Shchukin. In 1812, it was destroyed by a huge fire.

In August 1816, Muslim merchants petitioned to build a new mosque in the Tatar Sloboda, but they were refused. And only seven years later, in 1823, when public recalled the heroism of Muslim soldiers in the war against Napoleon, the Tatar-Muslim community was allowed to build a mosque on the land owned by Zamoskvoretskiy merchant Nazarbay Khashalov. However, there was one condition – the building was not allowed to resemble a mosque externally. For this reason, the mosque operated as an ordinary one-storey building until 1880. Only in 1881, the community was allowed to reconstruct the building according to the project by D.I. Pevnitskiy, with a minaret and a dome. It was around the same time that an orphanage and a madrasah emerged at the mosque.

In 1937, the historical mosque was closed, the minaret was demolished and the last imam, Abdullah Shamsutdinov, was repressed. The mosque became the home of the military registration and enlistment office, workshops and DOSAAF (Voluntary Society for Assisting Army, Air Force and Navy). During the Great Patriotic War, the mosque served as a center for forming partisan units and a collection point for warm clothes for front-line soldiers. However, since 1993 the mosque has been open for worshippers again. 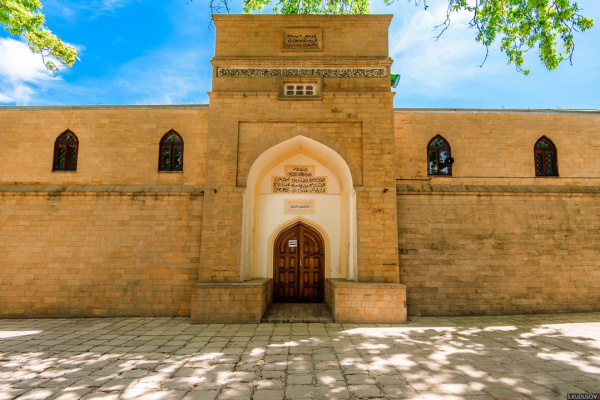 In the ancient city of Derbent, in Dagestan, there is probably the oldest mosque in Russia (and even in the CIS countries!) still in operation today – the Juma Mosque. According to historical sources, it was built between 733 and 734. The mosque is also a UNESCO World Heritage Site.

It was the emergence of the Juma mosque in Derbent that marked the spread of Islam throughout Dagestan.

The mosque construction was initiated by Maslama ibn Abd al-Malik, an Arab general and the conqueror of Derbent. There was also other mosque in Derbent, but this one was the most important.

Today, the mosque does not stand out against the background of modern, equally built of brick city constructions: it has no minarets; its dome is quite low – only 17 m high. But until the XIX century, the Juma Mosque was the largest building in Derbent. It was 67 m high and 17 m wide.

One can notice the ligature in the Arabic language above the doors. It says the date of foundation, as well as it mentions the destruction of the mosque in 1368 and that it has been rebuilt.

In the 1930s the mosque was closed. From 1938 to 1943 it served as a city prison, but later it was returned to worshippers. Today the mosque is open and welcomes all believers. 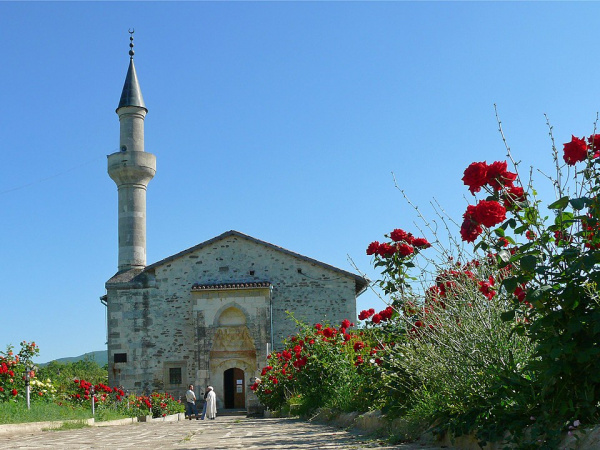 There is one very ancient mosque in the territory of Crimea. Back in 1314, when the peninsula was part of the Golden Horde, a mosque was constructed in honor of the ruling Khan Uzbek.

The building was a rather simple, rectangular construction with a gable roof. A low minaret was erected near the entrance. The material used for the walls was local rubble stone and imported granite. It is interesting that inside the mosque stunning samples of medieval stone carving were preserved. The granite walls of the mihrab were covered with carved ornaments and quotes from the Quran.

Behind the mosque one can discover the ruins of the oldest madrasah in Europe. It was built in 1332 by the request of Injibek Khatun, one of the Crimean benefactors of those years. For many centuries there was a large library in the madrasah, but in the course of time almost all books were lost. Until now, only a rare edition of the Quran from 1850 with engravings and drawings in the margins has survived. It is now kept in the State Hermitage Museum.

The Khan Uzbek Mosque is still in operation today. The Muslim temple is open not only to Muslims, but also to members of other faiths and everyone else. 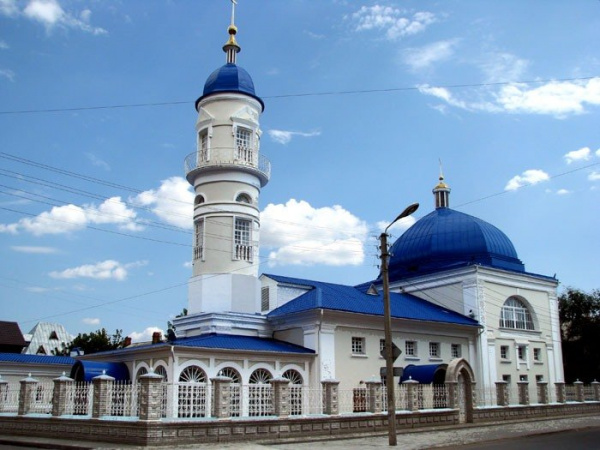 One of the oldest mosques in Russia is the White Mosque in Astrakhan. Another name of the mosque is Gilyanskaya. It was situated in the southern part of the historical center of Astrakhan, within the territory of the Tatar Sloboda.

The first reference of the mosque in written sources dates back to 1777. Academician Samuel Gottlieb Gmelin describes in detail the wooden mosque in the Bukhara Tatar Sloboda, which stands on a stone foundation, in his works. In 1809 the White Mosque was mentioned by researcher Ravinsky, who called it the main Tatar mosque in Astrakhan, which was “the most spacious and best made”.

Initially, the White Mosque, like other constructions at that time, was built of wood. In 1809, a Tatar of Bukhara court, Astrakhan merchant of the first guild David Izmaylov allocated funds to transform the building from wooden to stone one. He wrote in his request that the mosque was so dilapidated that it was dangerous to even conduct prayers there. The request was accepted and in 1810 Astrakhan’s White Mosque was constructed of stone in accordance with the same plan. Soon the wooden fence surrounding the mosque was also rebuilt in stone.

The mosque building was one-storey and consisted of a prayer hall, to which a semicircular protuberance of the mihrab adjoined on the south side. The prayer hall consisted of two parts, which were separated by a stone wall with three arched openings. Along the walls of the northern premise there were gallery-entresols for women. The ensemble was supplemented with a minaret on the northern side.

In the pre-revolutionary period, the White Mosque in Astrakhan housed maktabs and madrasahs. But in 1930, the mosque was closed and a kindergarten was set up within its walls. Later it was replaced by a sewing shop, bakery and even plywood factory. Due to the fact that the mosque was reconstructed each time in accordance with different requirements, it has not survived in its original form, as the minaret and mihrab are lost.

The cathedral mosque in Astrakhan was returned to Muslims only a year after the collapse of the USSR. Five years later, the Haji-Tarkhan Islamic Institute was opened at the mosque. When restoration works started, the madrasah moved for a while to a building next to the Black Mosque.