The final statement and recommendations of the fifth international meeting of Group of strategic vision, 2009

The final statement and recommendations of the fifth international meeting of Group of strategic vision “Russia – Islamic World: Partnership for Peace”, which was held in the State of Kuwait from 21-22 / 1/2009 under the auspices of the Advisor of Emir of Kuwait, Deputy Prime Minister for Legal Affairs, Minister of Justice and Minister of Islamic Affairs and Waqf respected Rashid Al-Hammad. 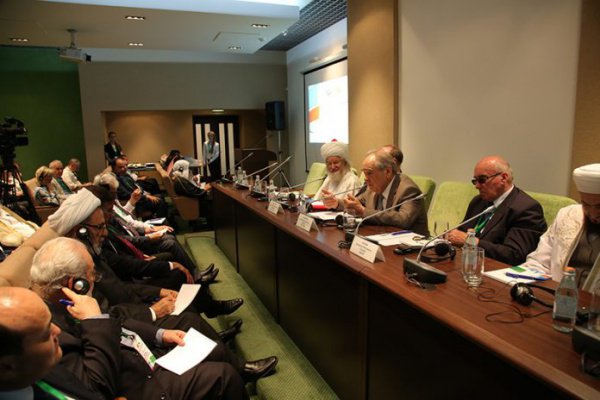 In the name of Allah the Most Gracious, the Most Merciful!

Praise be to Allah, the fifth session of Group of strategic vision “Russia – Islamic World: Partnership for Peace” which has been held in Kuwait from 21-22 / 1/2009 in the hotel “Sheraton”, under the auspices of the Advisor of Emir of Kuwait, Deputy Prime Minister for Legal Affairs, Minister of Justice and Minister of Islamic Affairs and Waqf respected Rashid Al-Hammad has finished successfully. The meeting was attended by the distinguished President of the Republic of Ingushetia Yunus-Bek Yevkurov, deputy chairman of the Federation Council Alexander Torshin, as well as ambassadors, ministers, scientists and thinkers of Russia and different Islamic countries.

This meeting was a continuation of previous meetings and conferences which has been held in Moscow, Kazan, Istanbul and Jeddah.
Speaking at the opening of the meeting, Rashid Al-Hamad warmly welcomed President Y. Yevkurov and the delegation which arrived with him. The Minister highly appreciated Russian contribution to the strengthening of international cooperation and security. He also stressed on the importance of cooperation between countries and reminded about numerous forums which have been held for the sake of intercultural dialogue by Kuwait. Then a greeting from the respected President of the Russian Federation Dmitry Medvedev was read out. The greeting on behalf of the President of Russian Federation was read out to participants of the meeting by the President of the Republic of Ingushetia Yunus-Bek Yevkurov. After the president’s speech was read out, Y. Yevkurov pointed to the need for the development of Islamic education and restoration of Islamic traditions in Russia and in particular in the Ingush society. President Yevkurov believes that it is a primary task today. He also stressed on Russia’s role in keeping the balance between east and west.

Then the Deputy Minister of Islamic Affairs and Endowments State of Kuwait and Chairman of the Higher Organizing Committee, Dr. Adel Al-Falah gave a speech. He warmly welcomed the Russian delegation and appreciated the achievements of its members and the activities of the Russian Federation to strengthen peaceful coexistence and cultural dialogue with the Islamic world. Dr. Adel Al-Falah said that “Al-Wasatiyyah” (principle of moderation and balance in Islam) is the basis for intercultural dialogue and cooperation with the Muslim world.

Then the chairman of the International Department of the Russian Muftis Council Rushan Abbyasov gave a speech. He noted the special role of Kuwait in supporting and assisting Muslims of Russia.

Also during the meeting the ceremony of awarding the First Deputy Minister of Islamic Affairs and Awqaf of Kuwait Adel Al-Falah the highest award of Russian Muslims Order “Al-Fahr” took place. The award was given to him by the Council of Muftis of Russia in recognition of his work in the service of Islam and the spread of values such as moderation and tolerance.

During the meeting, from 20 to 26 December 2009, the exhibition “Islam in Russia” was held at the main mosque in Kuwait, “al-Masjid al-Kabir” (Great Mosque).

The meeting consisted of five working sessions and the following topics were discussed:

1) Barriers to cooperation between Russia and the Islamic world.

2) “ Al-Wasatiyyah” and its role in strengthening the relations between Russia and Islamic world.

3) Determination of the strategic vision of the future of relations between Russia and Islamic world.

4) The basic principles of cooperation between the state and Islamic organizations in Russia.

5) The importance of tolerance and indulgence.

6) Perspectives of partnership between civilizations and ways of their development.

The meetings were held over two days, with the participation of eight speakers and nine commentators.

The final statement and recommendations, including six of complete, “working” projects, and twelve general recommendations were read at the end of the meeting.

1) Creation of institutions for translation Islamic literature from Arabic into Russian and from Russian into Arabic, with the involvement of experts from Russia and Islamic world. Also the creation of scientific, specialized committees which will be able to choose the most appropriate and suitable books for translation.

2) Development of a strategic plan, with clear goals and concrete objectives and programs, in order to enhance the role of the Group in the international arena and increase its effectiveness. The Kuwaiti side has undertaken to prepare the plan and submit it to the sixth meeting.

3) Creation of a Web site in Arabic, Russian, and later in other languages, dedicated to Group of strategic vision “Russia – Islamic world.” The Kuwaiti side has undertaken to take on the costs of the creation of the Arabic version of the website.

4) Studying the image and perceptions of Islam prevailing in the Russian society according to data of 2010.

5) Preparation of programs for training courses and seminars to explain the values of “Al-Wasatiyyah” and confrontation of calls to extremism and intolerance.

6) Approval of the creation the project of publishing a hundred books for five years, half of which will be in Russian, and the other half in Arabic. Books in Russian language will acquaint the reader with the Islamic world and in Arabic language with the Russian Federation. The Kuwaiti side has undertaken to take on 50% of the project costs.

1. To call on the media from both sides to promote the development of constructive dialogue and cooperation.

2. Work on organization programs for the exchange of scientific, cultural and tourist visits in order to make closest acquaintance with the culture and traditions of both regions.

3. Adopt a plan for the creation of the movement of intellectuals and scientists in the field of religion, which is aimed for enhancing cooperation and brotherhood between people, as well as support for research and discussion.

4. Call to all Islamic states to cooperate with the center “Al-Wasatiyyah” in the Russian Federation.

5. To support the intellectual and cultural activity of the Russian center “Al-Wasatiyyah” in order to strengthen the culture of dialogue, to promote the principles of moderation and balance, to counteract the extremism and to strengthen relations between Russia and Islamic world.

6. Invite all organizations of both sides to promote peaceful coexistence and human values.

7. To acquaint Russian society with the experience of the Ministry of Awqaf and Islamic Affairs of Kuwait in the field of strengthening and supporting families; as well as to familiarize with the way Islam looks at the family and its role in strengthening the stability, unity and development of the society.

8. To strengthen the economic relations between Russia and Islamic world through the creation of favorable conditions for cooperation between entrepreneurs, investments and trade.

9. To strengthen the activities of civil society organizations of both sides in the field of mutual cooperation, dialogue and mutual understanding in society.

10. To assist in the development of ideas and projects of Islamic organizations in Russia in agreement with the official (governmental) agencies on both sides.

11. To apply to the Russian side with the request to provide the necessary conditions for the Arab side in the various areas of interest (visas, scholarships for students, trade, opening of direct flights, etc.)

12. To establish a working group in the host country which will monitor the implementation of recommendations and preparation of required reports to provide them at a forthcoming meeting.

After the meeting, all participants expressed their sincere gratitude to the State of Kuwait, represented by the country’s leadership and the Kuwaiti people. The letter of thanks for His Highness the Amir of Kuwait, the heir to the Emir, the Prime Minister, Deputy Prime Minister for Legal Affairs, Minister of Justice and Minister of Islamic Affairs and Awqaf was read out. The participants thanked them for the invitation to the meeting and for the attention and care. Then all the participants warmly thanked the esteemed Russian President Dmitry Medvedev for his greeting message to the participants of the meeting and for their assistance to projects serving to strengthen cultural dialogue and co-operation between Russia and Islamic world. They also noted the achievements and thanked the former President and now Prime Minister Vladimir Putin for his continuing efforts for rapprochement of the parties.