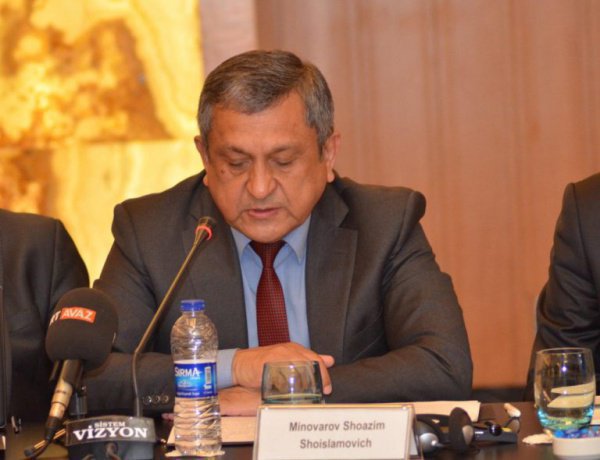 Head of the Islamic Culture Center Under Uzbekistan’s Cabinet of Ministers addressed the Fourth Annual RIW Group meeting in Dagestan.

THE UZBEK PRESIDENT BELIEVES ONE OF THE MAIN REASONS FOR THE CURRENT GLOBAL THREATS LIES IN IGNORANCE, BOTH IN RELIGIOUS AND SECULAR MATTERS, PARTICULARLY AMONG YOUTH.

Modern Uzbekistan lay at the crossroads of cultures and civilizations, and the works by our scholars and intellectuals have been recognized as part of the world heritage.

Since our independence, we have heavily focused on conveying the message of pride on our spiritual legacy to our youth and bringing them up in line with national and universal human values

THE PRESIDENT SUGGESTED ESTABLISHING THE ISLAMIC CULTURE CENTER IN TASHKENT TO DEMONSTRATE OUR PRECIOUS CONTRIBUTION TO THE WORLD SCIENCE, CULTURE AND THE DEVELOPMENT OF ISLAM AS A RELIGION.

We are now working to establish ties with similar centers around the world and in Europe in particular. We have already signed more than ten memoranda of understanding with cultural and research institutions in the UK, France, Malaysia, Russia, Saudi Arabia, Jordan, Egypt, Turkey and other countries.

At the 72nd UNGA in September 2017, the President of Uzbekistan said the world should not link terrorism and extremism to Islam.

HE ALSO SUGGESTED SIGNING AN INTERNATIONAL CONVENTION ON YOUTH RIGHTS THAT WOULD PROTECT IT FROM THE IDEOLOGY OF VIOLENCE AND TERRORISM.

The motion by Russian colleagues on the establishment of the Young Leaders Academy serves the right purpose. Based on our experience, I can suggest introducing training and retraining of young imams into the syllabus.

The future international Academy should become a source of new leaders versed in political and religious matters.

UZBEKISTAN, WHICH HAS TRADITIONALLY BEEN THE TRAINING CENTER FOR RELIGIOUS LEADERS FOR CIS COUNTRIES, STANDS READY TO ASSIST IN THE ESTABLISHMENT OF THE FUTURE ACADEMY.

We also invite you to help us in achieving the noble agenda of the Islamic Cultural Center.