The influence of the Media on public opinion and the formation of the international agenda: 1st day of the International Forum

https://russia-islworld.ru/32h/
The influence of the Media on public opinion and the formation of the international agenda Group of Strategic Vision "Russia - Islamic World"

The V International Forum of Muslim journalists and bloggers "The influence of the Media on public opinion and the formation of the international agenda" under the auspices of the Group of Strategic Vision "Russia-Islamic World" started today in St. Petersburg.

The Forum is divided into several thematic sections: "The influence of the Media on the formation of the international agenda", "Information and psychological warfare", " Fake news: response and counteraction strategies". 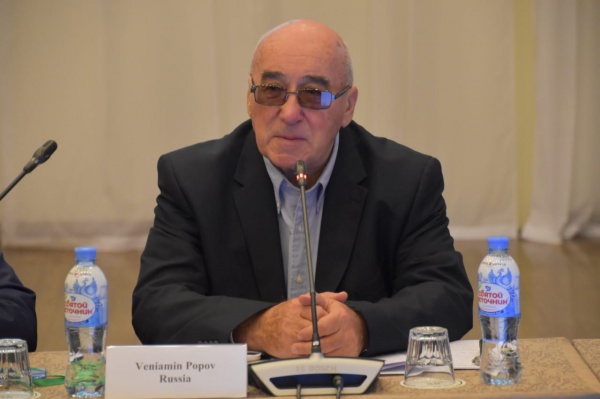 Veniamin Popov, chief adviser to the Chairman of the Group of Strategic Vision "Russia-Islamic World"

The plenary session was opened by Veniamin Popov, chief adviser to the Chairman of the Group of Strategic Vision "Russia-Islamic World", Ambassador extraordinary and Plenipotentiary of the Russian Foreign Ministry. In his opening remarks, Popov noted that the world is now at a turning point in its development. Non-Western civilizations are coming to the fore, resulting in a change in the balance of power in the political arena. The situation in Syria is a vivid example of this. The turning point of this conflict was achieved largely due to Russia. Veniamin Popov stressed that three states - Russia, Iran, and Turkey - are doing a lot to put on a solid footing the settlement of the Syrian conflict. 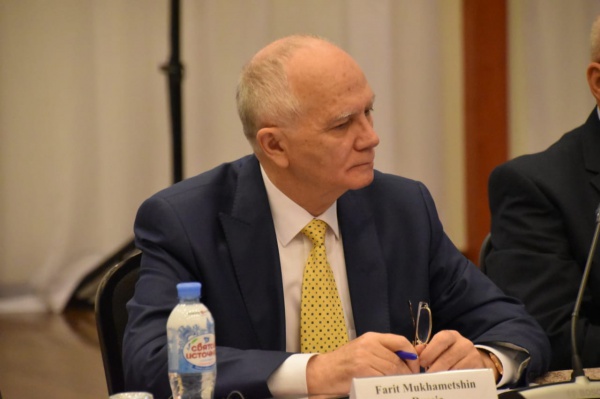 "Russia and Muslim countries are united by traditional partnership relations, including in the promotion of inter-civilizational dialogue in ensuring security and stability. I am convinced that the discussions will be meaningful and fruitful and will help to outline promising joint projects, as well as will serve to further strengthen trust and understanding between our countries", -  the message reads.

In addition, Farid Mukhametshin stressed that Russia's cooperation with Islamic civilization can affect not only the Middle East, but also the Eurasian space. And more than 1000-year history of peaceful coexistence of different religious in the country proves that. Russia's position on many issues is traditionally close to that of Muslim countries. 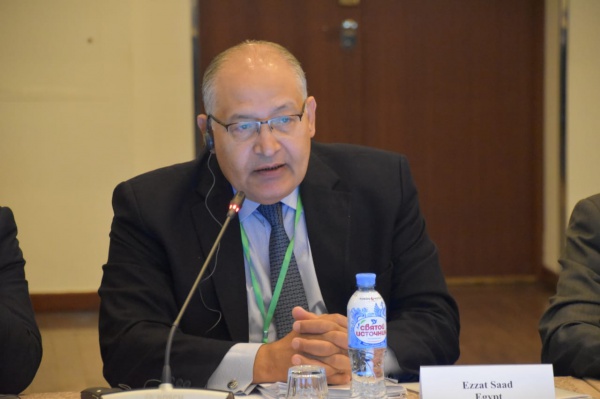 Ambassador Ezzat Saad, Director of the Egyptian Council for International Affairs and a member of the Group of Strategic Vision "Russia-Islamic World", in his speech focused on the article by Russian Foreign Minister Sergey Lavrov, noting that the Russian approach to solving important civilizational issues presented in it is fully consistent with the principles of the UN, which are increasingly being trampled. Mr. Saad also discussed the specifics of modern information warfare on the example of fake news spread against Russia, Iran and the Palestinian liberation movement. 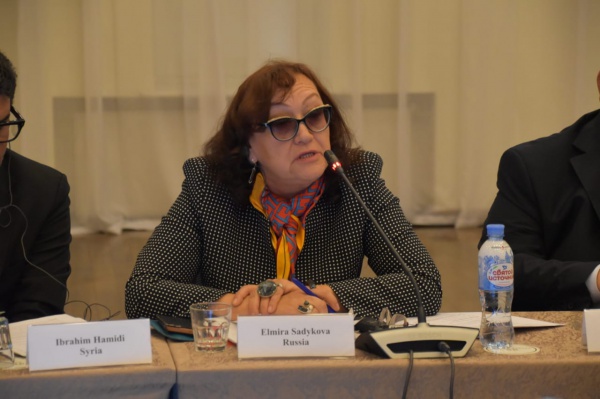 Executive Director of the Fund of Strategic Dialogue and Partnership with the Islamic World Elmira Sadykova focused on information security in her speech. She noted that attempts to cultivate enmity and hatred are becoming increasingly alarming, causing mistrust among peoples. The Forum of journalists helps to unite the efforts of professionals who know and understand the role of information processes in modern society. Elmira Sadykova expressed hope that such efforts will help to find creative answers to the threats faced by the world community in the field of information space. 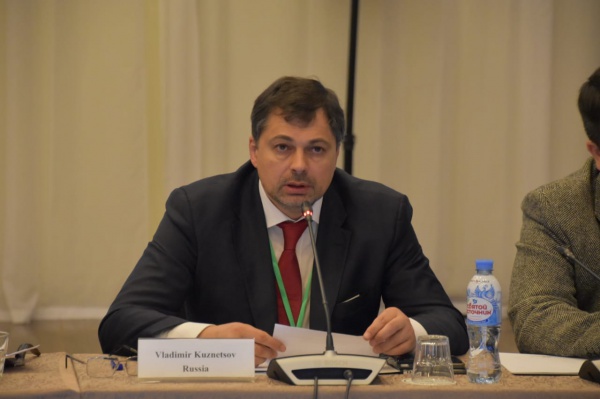 Vladimir Kuznetsov, Director of the UN Information Center in Moscow

Vladimir Kuznetsov, Director of the UN Information Center in Moscow, said that the activities of this Forum develop a dialogue of cultures and civilizations. And it coincides with the basic values of the UN. Many Muslim journalists work in "hot spots", and therefore the stated problems at the Forum - the security, rights and freedom of journalists - are also an urgent topic that is actively discussed in the UN. 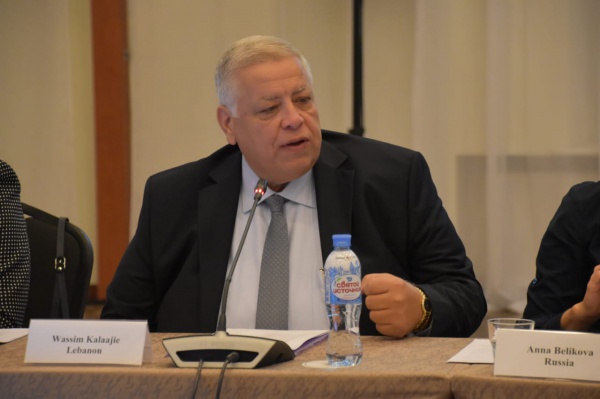 Political expert from Lebanon, laureate of Primakov Award, a member of the Group of Strategic Vision "Russia-Islamic World", Wassim Kalaajieh presented a comparative analysis of the foreign policy of Russia and the USA in relation to the Persian Gulf. In his opinion, Russia should play an important role in the demilitarization of the Persian Gulf. Official Moscow's proposal to hold an international conference where all significant political forces of the region would sit around the same negotiating table carries a positive charge. It is the opposite of the statements of the US representatives. Washington welcomes the idea of creating a military bloc in the region, a kind of analogue to NATO. But political dialogue in the current realities is the only tool for conflict resolution. Russia is consistently defending this position. 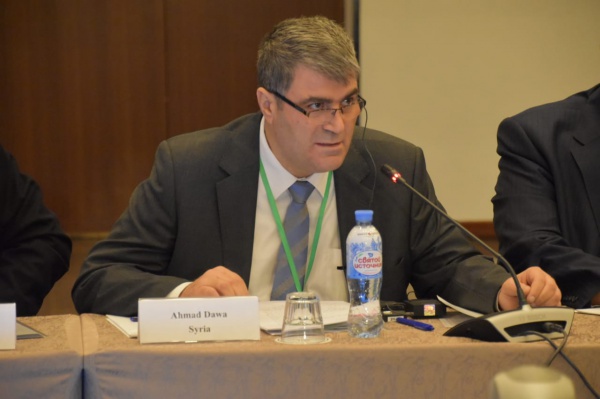 Deputy Minister of Information of the Syrian Arab Republic Ahmet Dawa noted that the information war against Syria is conducted in parallel with the real one, sometimes ahead of it. The heaviest strikes are those aimed at sowing discord between different communities within the Syrian people. In his speech, the Syrian politician gave a number of examples of how foreign forces are deliberately trying to sow discord in the country. So, in 2011, there were 117 centers that were engaged in information attacks against Syria. Then, their number increased to 200. All reports were outright lies. For example,  provocateurs reported false information as reports of SANA official Syrian news Agency 194 times. Another example is that the Syrian government has adopted a series of decrees that guarantee the safe return of any Syrian migrant. The President has issued amnesty for many types of crimes. But this news was followed by a new information campaign, which spread false information. A similar model was rolled out earlier, when the Syrian government granted access to all facilities where chemical weapons could be produced. Immediately after that, Western and Israeli media actively disseminated information that such weapons were actively used by government forces. 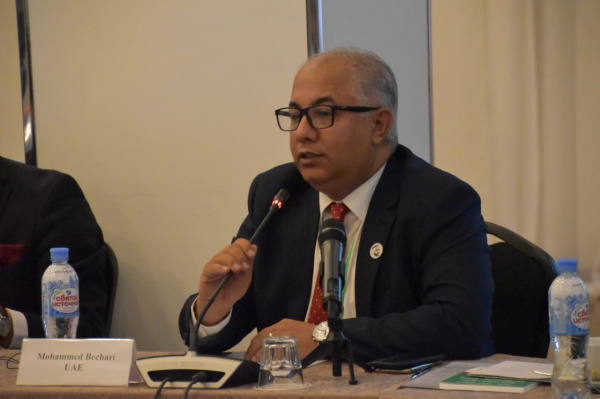 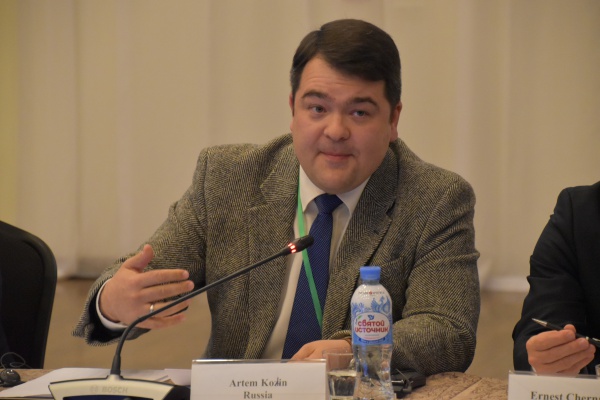 Deputy Director of the Information and Press Department of the Ministry of Foreign Affairs of Russia Artyom Kozhin in his speech noted that the quality of fake information has become better than10 years ago when it was easy to distinguish fake news from real ones. Through social networks, the speed of information delivery has increased. The Ministry of Foreign Affairs of the Russian Federation is actively responding to the most odious new about Russia, published in media in different languages. By the way, a special section devoted to such publications on the agency’s website has 6 million unique users per year. 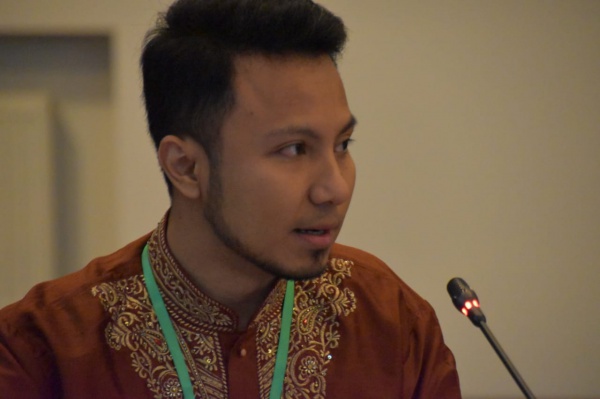 Fauzan al-Rashid, Senior editor of "Russia beyond the headlines" (Indonesia)

Fauzan al-Rashid, Senior editor of "Russia beyond the headlines" (Indonesia), noted that the bias in the estimates of events coverage is common issue in Russian and Islamic countries. In order not to get caught by "fakes" distributors, it is necessary to carefully check  the sources and develop a habit to look critically at the information received. A report by Dr. Jamaluddin Bin Mohammed, Senior editor of the Malaysian national news agency, added tips for dealing with false information. Malaysia has developed standards according to which there is a rapid response to the circulation of fake news. Public organizations are actively checking sources. Distributors of false information bear responsibility. 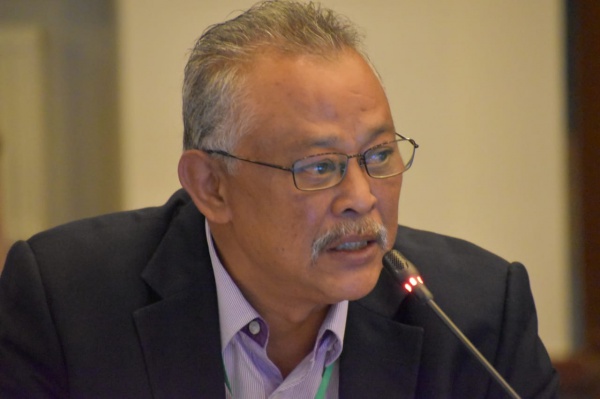 Professor, Director of the Center for Russian studies at Cairo University Nurhan Elsheikh presented a detailed analysis of the phenomenon of "fake news" and ways to solve the problem. In her opinion, there is a need in a comprehensive approach where the fight against lies should be conducted both at the level of civil society (critical thinking, verification of information) and at the level of the state (promotion of the code of ethics, tougher punishment for the spread of "fakes news"). 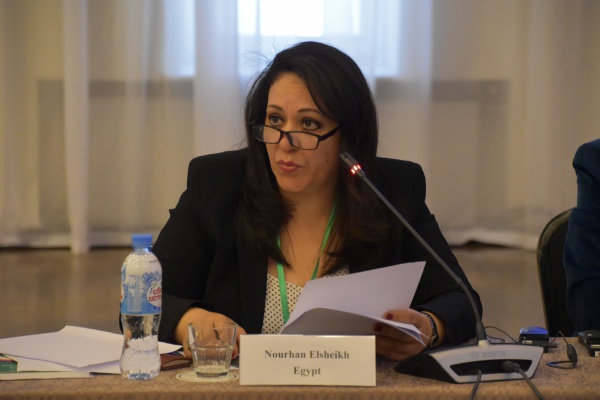 Professor, Director of the Center for Russian studies at Cairo University Nurhan Elsheikh

Mikhail Kalmykov, first Deputy General Director of TASS, also elaborated on the importance of ethical aspects of journalistic activity. He opposed the mechanistic understanding of the activities of journalists as a simple delivery of information. Social networks are a channel of information distribution. To compete with them in speed is meaningless. Accuracy is a much more important thing. It is the responsibility of people who must be conscientious in their own efforts to inform citizens. The danger of fake news, according to the expert, is not only in the unreliability of information but also in the formation of a distorted agenda. Thus there is a mythologization of modern social and political processes. 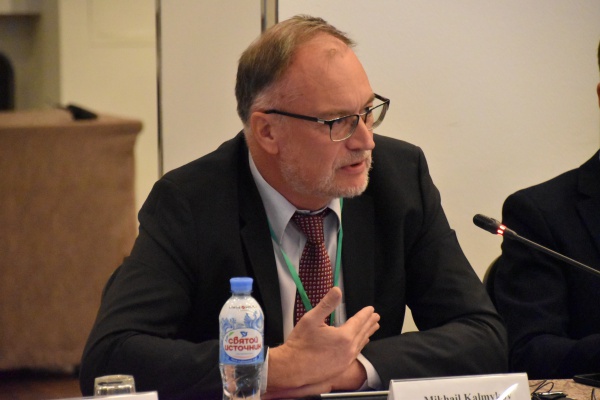 Shuprova Tasnim, special correspondent of the Dhaka Tribune (Bangladesh), noted that the problem of fake news is widespread and also relevant to her country. In South and South-East Asia, there is an interesting situation where many Internet users do not know other platforms for the dissemination of information, except for Facebook social network. This application is installed on almost all mobile devices, and therefore the Internet actually began with this social network for many people. The algorithms that give out information within it create the effect of an Echo chamber - a situation in which certain ideas, beliefs are amplified through the transmission of a message or its repetition within a relatively closed system. 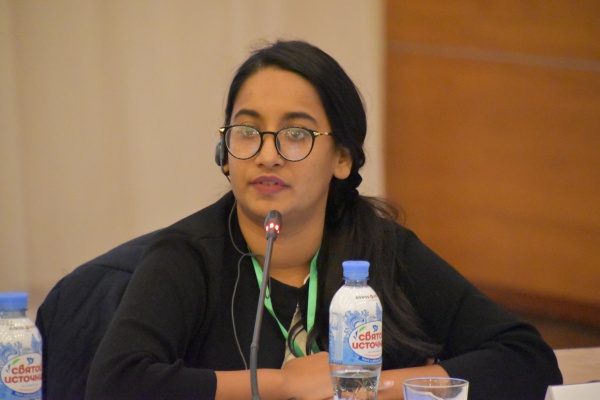 Suhail Farah, Chief expert of the Foundation for Strategic Dialogue and Partnership with the Islamic World, focused on the philosophical aspects of the fake news phenomenon. In his opinion, a person can loose moral guidance in the seething flow of information (often having nothing to do with reality). The Egyptian expert Ahmad Moslemani and Moroccan politician Said Mabshur gave examples of the proliferation of fake news from the context of their own countries. Chairman of the Association of publicists – supporters of Russia (Jordan) Marwan Sudah, who has been writing about Russia for 50 years, devoted his report to American information campaigns against Russia. 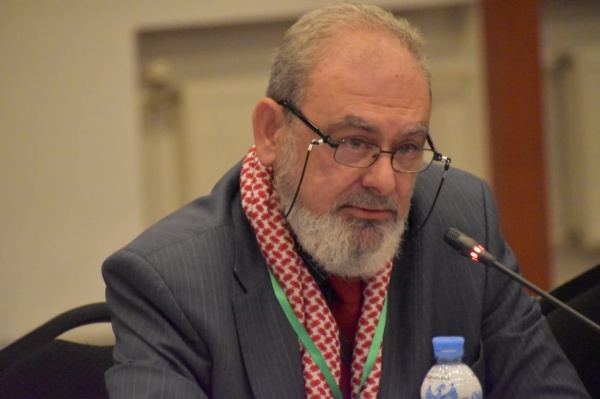 Ernest Chernukhin, Head of International Information Security Section of the Ministry of Foreign Affairs of the Russian Federation, spoke about the technological aspects of modern information warfare. In his opinion, currently online incidents may  lead to the unleashing of full-scale armed conflicts. One of the reasons for this is the imbalance in the international political arena. It is necessary to exclude the situation when one state itself determines the nature of cyber threats and decides to strike at another country, regardless of the position of the international community and the United Nations. Chernukhin also noted that in December 2018, the UN General Assembly approved the resolution proposed by Russia, which opened a new stage of discussions on the role of modern technologies and communications in the socio-political development of individual states, and in relations between them at different levels - bilateral, regional, global. This resolution developed 13 rules of behaviour of  the states in the information space. The list includes provisions such as the exclusive use of information and communication technologies (ICT) for peaceful purposes, the validity of any allegations of unfair use of ICT, and so on. 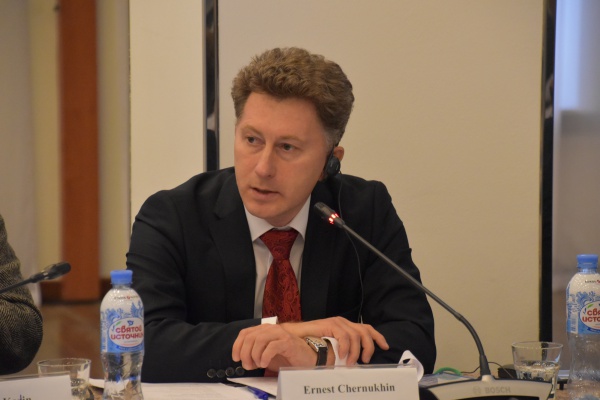 Ernest Chernukhin, Head of International Information Security Section of the Ministry of Foreign Affairs of the Russian Federation

Russia is also actively initiating discussions on the use of ICT for criminal purposes. Losses over the past year from cybercrime amounted to $ 1.5 trillions. In the near future, this volume may increase to 8 trillions. Terrorism and cybercrime are being merged. Ernest Chernukhin stressed that Muslim countries are the initiators of discussions on this topic along with Russia. And it once again demonstrates the closeness of positions between these subjects of modern world politics.