On 5 October, the Kazan Kremlin Museum-Reserve held the opening ceremony of the exhibition “Light from the East” at the reception halls. The exhibition includes 150 works of art by outstanding artists, sculptors and masters of artistic crafts. The exhibition is part of the All-Russian Plein Air dedicated to the 1100th anniversary of the adoption of Islam by Volga Bulgaria and will be open until 10 November. Then the project can be seen by residents of Moscow, Saint Petersburg and other cities of the country.

The exhibition is organized by the Russian Academy of Arts, the Ministry of Culture of the Republic of Tatarstan, the Kazan Kremlin State Museum-Reserve, the Spiritual Assembly of Muslims of Russia and the Institute of Philology and Intercultural Communication of Kazan Federal University. 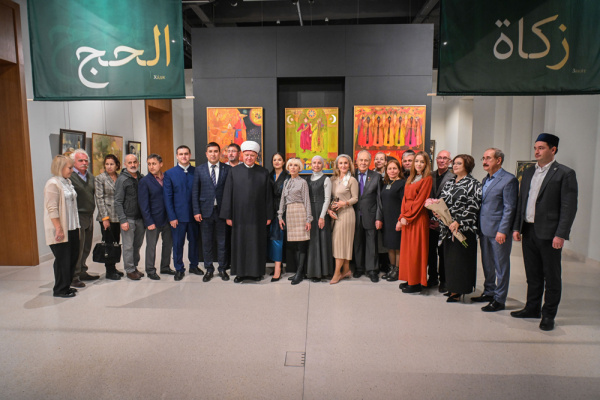 The opening ceremony was conducted by Elmira Akhmetshina, Rector of the Kazan Institute of History and Design, Associate Professor at Kazan Federal University. She noted that the project brought together prominent representatives of fine arts, including academicians, corresponding members of the Russian Academy of Arts, people’s and honored artists from Moscow, Moscow Oblast, St Petersburg, the Republic of Tatarstan, the Chuvash Republic, the Krasnodar Territory, the Stavropol Territory, the Republic of Crimea, the Republic of Dagestan, Sverdlovsk Oblast, Penza Oblast, Yaroslavl Oblast, Kostroma and Kirov Oblasts.

Their highly artistic works trace the theme of the adoption of Islam, and the emergence and existence of Bulgarian civilization.

Elmira Akhmetshina also reminded that before Kazan the exhibition had been presented in the Chuvash Republic, Crimea and Bolgar, where Mintimer Shaimiev visited the participants of the plein air and talked to each artist.

‘Islam gave a powerful impetus to the development of science, theology, spiritual literature and arts. Islam is now an integral part of the Russian statehood and culture. Along with other traditional religious, it makes a significant contribution to maintaining international peace and sustainable development of the state. This is the reason why in this year of the millennium of the adoption of Islam by Volga Bulgaria in Russia a plan of events was drawn up and approved by Russian President Vladimir Putin, which included the All-Russian plein air dedicated to this event.

A plein air is painting by artists outside their studios in the open air in natural light. We have held the following events: a one-day urban plein air for everyone in Kazan, a workshop, a number of exhibitions, and the publication of a catalogue is planned.

‘For our plein air artists, one of the most significant events has become the exhibition on the square in front of the White Mosque in Bolgar which was visited by Mintimer Shaimiev, who talked to each artist,’ Elmira Akhmetshina said.

Then the speech was delivered by Mintimer Shaimiev, who thanked the organizers and representatives of fine arts for the exhibition, calling it and all the events marking the 1100th anniversary of the adoption of Islam by Volga Bulgaria a gift from God. 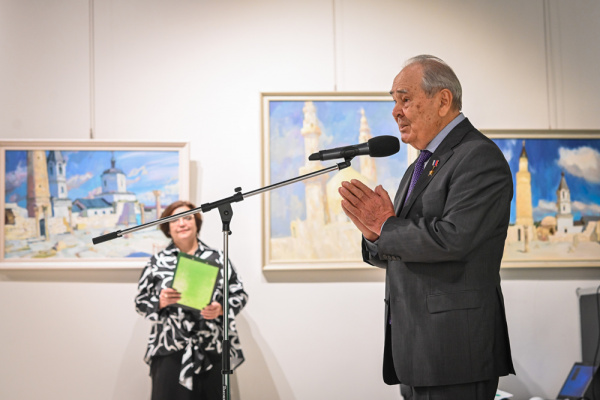 ‘Reflective people realize how incredible good events have happened within such a short period of time in our republic. These include the revival of the historic Kul Sharif Mosque and the restoration of the Cathedral of the Annunciation on the territory of the Kazan Kremlin; the revival of the ancient city of Bolgar and the island-town of Sviyazhsk, which were inscribed on the UNESCO World Heritage List; the creation of the Bolgarian Islamic Academy and the restoration of the Cathedral.  No matter how much we thank the Almighty, all will not be enough for such a gift from on high.

How deep a mark we can leave in human history and for centuries to come depends on our diligence and wisdom. The first step has already been taken, but it is not enough. If we want to, we can,’ Mintimer Shaimiev addressed those who are present.

He also mentioned that it is planned to publish and present in one of the higher educational institutions 7 volumes of encyclopedia on history of the Tatar people which had been written during many years. After his speech the prominent political figure called upon the public for fruitful cooperation for the benefit of development and prosperity of the country and the republic as a whole.

‘When we came to the Director of the Institute of Philology and Communications with the idea of holding such a plein air, he said that we should go to Albir Krganov because, in his opinion, he was the person who would support and do everything to make the project happen and immediately put us in touch by phone. ‘Right, let us make it happen,’ Albir Krganov said without any doubts. The first meeting took place last January, and today we are already holding this exhibition with the full support of the Spiritual Assembly of Muslims of Russia,’ the presenter recalls the history of creation of the exhibition.

‘For those with intelligence and a sober outlook, this is an incredible event in the history of the Tatar people,’ Albir Krganov supported Mintimer Shaimiev’s words about those who ponder. 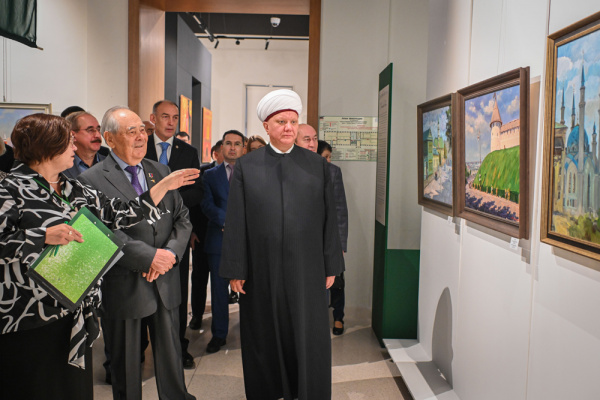 ‘If I may, I would like to share a very intimate thing which I have never spoken about from high tribunes. Back in 1989, it was forbidden to visit Bolgar, and people were scared to touch that land of the ancestors in order to learn their history. I was still a schoolboy at the time when the aksals of my small Chuvash village mosque were going to set off to Bolgar, and I asked to go with them. There is a lake called Rabiga Kul near Bolgar. There are a lot of legends about it. When elderly people saw it, they ran as fast as they could to the lake and started scooping water and drinking it, despite the fact that ducks and people were swimming in the lake. They were not at all embarrassed by that – they missed their historical memory so much. At that time, I wished with all my heart that such years would come when order would be restored there and the former glory of Bolgar would return. Nobody then could imagine that here, thanks to tremendous work and wisdom of Mintimer Shaimiev, mosques, a madrasah, the Academy and excellent infrastructure would be built. There were 36 Khans in Bolgar, but could they have done as much for their people in 1100 years as Mintimer Shaimiev could in some thirty years? He managed to make the right decision, which respects the balance of cultures and confessions, and consistently builds social and international stability,’ the religious figure shared his memories.

According to historian and archaeologist Fayaz Khuzin, ‘Tatar history can be studied not only through encyclopedias. And by looking at pictures by Baki Urmanche, Kharis Yakupov, Lotfulla Fattakhov and Ferdinand Khalikov, one can find a lot of useful information about our history’.

‘The paintings at the exhibition mainly reflect the theme of the pre-Mongolian, Golden Horde time and the Kazan Khanate. But our history is not limited by it. There is a very dark period, a difficult time in our history, particularly in the Islamic religion – the XVII century. That period must be covered,’ the scholar stressed the need for scientists to continue working closely with contemporary artists to revive our historical heritage.

In conclusion, the organizers of the exhibition presented a letter of gratitude to Ilnur Rakhimov, Director of the Kazan Kremlin Museum-Reserve, for the perfectly organized exposition.

Photo: official website of the State Adviser of the Republic of Tatarstan