The northernmost capital of Islam – how was the “Islam in the Multicultural World” forum?

More than 200 experts and 10 sections, 4 days and a variety of discussions – the traditional international forum “Islam in the Multicultural World” came to an end. It was held at the Institute of International Relations of KFU in Kazan. Leading foreign and domestic scholars of Islam, representatives of the authorities of the Russian Federation and the Republic of Tatarstan, as well as Muslim communities of Russia and Tatarstan, Russian Islamic universities and madrasahs gathered together in order to discuss the most important issues on the global agenda.

Islam is an integral part of the Russian society

During the plenary session, Ambassador Extraordinary and Plenipotentiary, Member of the Federation Council, Deputy Chairman of the Group of Strategic Vision “Russia – Islamic World” Farit Mukhametshin noted in his video message to the forum participants that “the forum “Islam in the Multicultural World”, which has been held for 10 years, contributes to the discussion of contemporary problems of the inter-cultural and inter-religious dialogue development”. The diplomat emphasized the high scientific level of the discussion, which brought together eminent experts, including those of international organizations. 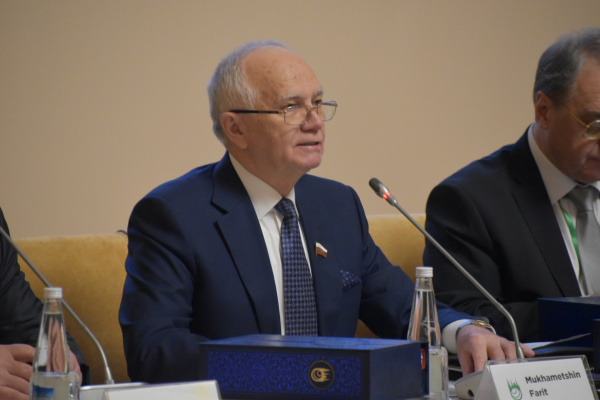 “I am delighted that Irina Bokova has addressed the forum. As Director General of UNESCO from 2009 to 2017, she was implementing the idea of a “new humanism”. I recall her brilliant speech just a few months ago at the “International Forum of Writers and Intellectuals named after Chingiz Aitmatov” organized by the Group of Strategic Vision “Russia – Islamic World”. And today her participation in the forum gives new meaning to the problems being discussed”, he noted.

The participation of Vitaly Naumkin, a renowned Orientalist, Academician of the Russian Academy of Sciences, Academic Director of the Institute of Oriental Studies, also adds a special flavor to the forum. “As one of the most active members of the Group of Strategic Vision, his contribution to the problems being discussed is invaluable”, Mukhametshin highlighted. Mounir Bouchenaki, an old friend of Russia and the Group of Strategic Vision, renowned UNESCO World Heritage expert, Special Advisor to the UNESCO Director General, also became the forum’s guest of honor. Thanks to his direct involvement, Russia has participated in a great number of international events, including the first celebration of the UNESCO International Day of Islamic Art in Bahrain (18 November 2020).

As Rector of KFU Ilshat Gafurov noted during the plenary session, Islam has always been an integral part of life thanks to the support of the republic’s leadership, including through scientific projects and the revival of Islamic values. His idea of Kazan’s special location and its role in the development of Islamic culture in Russia and in the world was also supported by Vitaly Naumkin, Academician of the Russian Academy of Sciences, Academic Director of the Institute of Oriental Studies. According to him, this is the place where domestic Arabic and, to some extent, Oriental studies originated. This is where they began to develop. 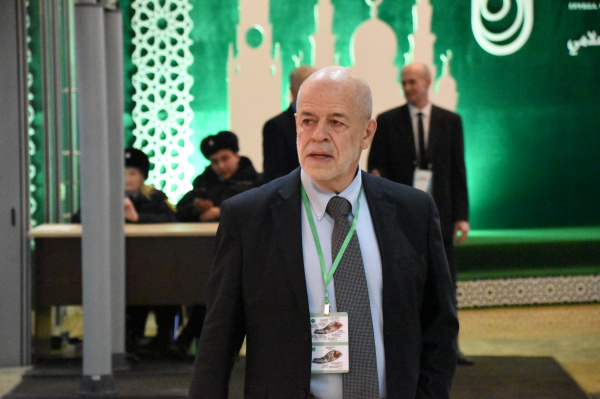 “15 years ago I came to Kazan in order to shoot several episodes of the film “Russia and the Arabs” in the Arabic language for the Arab audience. I remember what there was at the site of Bolghar, Sviyazhsk and how Tatarstan has changed to the better since then”, the speaker noted. “I would like to stress that Tatarstan is a successful example of multiculturalism. Its identity, cultural uniqueness, including religious one, not only coexist peacefully, but also enrich each other”. Naumkin believes that this approach makes it possible to effectively counter terrorist ideologies: “Extremists and terrorists suffered heavy losses when the world united against them. Now we are witnessing the death throes of these organizations. Here it is important to highlight that the Kazan school of both secular Oriental studies and Islamic education is a flagship in countering these deadly tendencies, which also appeared in the corners of our country but have been almost completely eradicated”.

Drawing the attention of the colleagues and journalists to the symbolism of the forum’s name, Vitaly Naumkin also stressed that the current conditions of social interaction created by the pandemic, contributed to the emergence of unprecedented opportunities for intercultural communication through new formats. “It helps to adapt to a new way of life, and the modernizing trends possessed by today’s leaders of the Islamic domestic ummah deserve much attention, and it is no coincidence that they experience the resistance from more conservative ummah members. We understand that Russia is a flagship of the process that is taking place throughout the Islamic world and affecting even conservative states such as the Kingdom of Saudi Arabia”, the speaker concluded. He added that a special role in this process is played by the revival of the Tatar theological school, the value of which has not been fully realized by the world yet.

Islam is not just a faith

Ramazan Abdulatipov, Special Representative of the Russian Federation to the Organization of the Islamic Cooperation is convinced that the Islamic factor occupies a special place on the global agenda, and in this regard, one cannot but mention the work of the Group of Strategic Vision “Russia – Islamic World” headed by President of the Republic of Tatarstan Rustam Minnikhanov. According to him, Islam is not just a belief. “Unlike other religions, Islam comprises literally all spheres of human society. These are the state, the law, the way of life – Islam is a broader concept than one that is being tried to prove us. And sometimes attempts to confine Islam only to the religious sphere are detrimental to Muslims and ummah. One should use the concept of “Islam” and its influence in the development of all human civilization in a wider way”, the speaker assured. But, unfortunately, today we are witnessing how the Muslim community is taking a defensive position, constantly making excuses. But there is no need for that since the entire history of Islam is a great cultural potential, a vast and unique history. 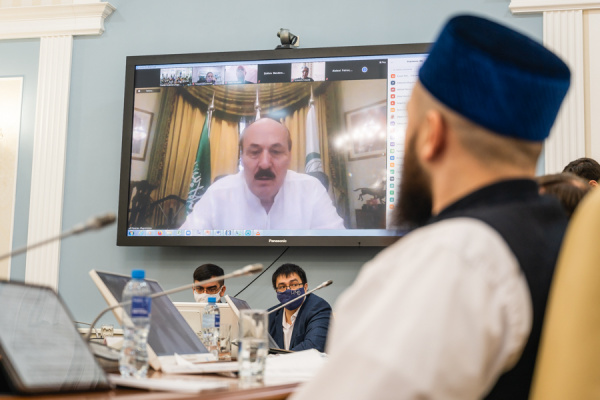 Recalling that this year marks the 15th anniversary of Russia’s accession to the OIC as an observer state, Abdulatipov told what work had been done over those years. “A framework agreement was signed with the OIC, according to which political consultations between the Russian Ministry of Foreign Affairs and the OIC take place every year. I would like to note that Russia and the OIC are of similar views on the main issues of the Islamic world and world politics. Apart from it, a new OIC declaration on human rights was adopted at the meeting of the OIC Council of Foreign Ministers on 27-28 November. Declarations on the rights of the child and on family values are being prepared. The Islamic world has positively accessed the amendment to the Russian Constitution stating that family is the union of the man and the woman”, Special Representative of the Russian Federation to the Organization of Islamic Cooperation summarized.

Al-Waheishi Ahmed Salem, Ambassador Extraordinary and Plenipotentiary of the Republic of Yemen to the Russian Federation, also spoke about the important role of Russia and Tatarstan in particular. He noted that Kazan is a symbol for Islam and for whole Russia. “The religion of Islam is a religion of peace. Islam accepts all the religions and teaches us to live in peace and harmony”, the Ambassador is convinced. 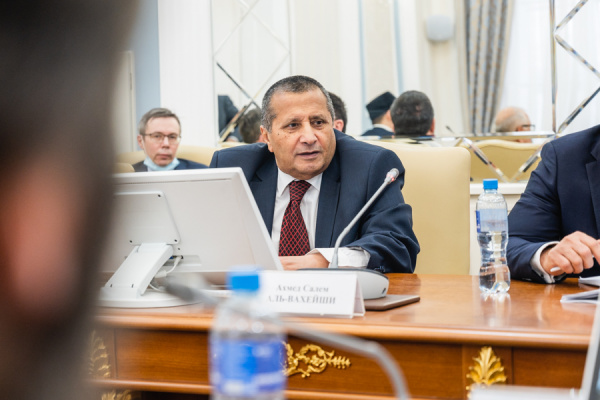 According to him, Kazan is not just the center of Islam in Russia, but also the northernmost Islamic capital. “Through their activities, terrorists steal the religion. We know there is no such thing in Tatarstan. Islam is against terrorism. And it is very good that conferences like this make it possible to emphasize this message once again”, the Ambassador summarized. Incidentally, this year marks the 93rd anniversary of relations between Yemen and Russia. By the way, one of the diplomats who signed that agreement many years ago was Karim Ahmed, a specialist from Tatarstan. “Russia plays a great role in establishing peace in Yemen. We always regard Russia as a close friend that supports us and peace in our country”, Al-Waheishi Ahmed Salem noted.

The traditions of Russian Muslims originated and consolidated over many centuries in multi-confessional society. The fact that the Tatars have been living on the border between the East and West, Asia and Europe, the Russian-Orthodox and the Turkic Muslim worlds led to the emergence of outstanding and extraordinary thinkers among them. Mufti of the Republic of Tatarstan Kamil Hazrat Samigullin stated this during the plenary session. According to him, this border state has always stimulated the Tatars to reflect on their place and the place of Islam within the context of the crossroads of cultures and peoples. 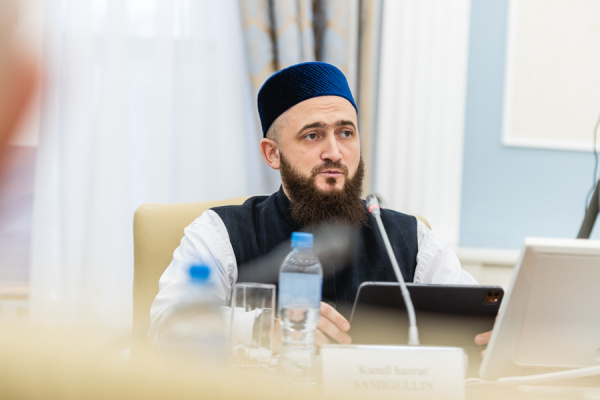 “Neighbourhood with non-Muslim peoples encouraged our ancestors to develop in order to improve the situation of Muslims. In addition to it, they had the opportunity to compare different traditions and cultures and to achieve a harmonious life and development for our people. Russian Muslim theologians, who lived and worked with such a perception of Islamic values and Russian reality, as a result built a unique, successful and flexible model for the development of Islam in multi-confessional society and the education of new generations of Muslims with intellectually sound understanding of Islamic values, which make it possible to combine tolerance and piety”, Kamil Hazrat stressed.

In his speech, Kamil Hazrat once again stressed the fact that Russia was a large home for numerous peoples and religious groups that had always defended the country and built the Russian statehood. Muslims took part in the formation of the great Russian nation as well. “Theological legacy of Russian Muslims has not lost its relevance and is waiting when we, a new generation of theologians, will be able to study, revive and popularize it. Today we have all the opportunities for this. President of Russia Vladimir Putin and President of Tatarstan Rustam Minnikhanov provide us with their full support in this matter. Thanks to their support, the necessary material basis for the further fully-fledged development of Islam has been created in the country today, including within the walls of the Bulgarian Islamic Academy. We place our hope on its graduates, who dedicate their dissertations to the names of native Islamic scholars who devoted their lives to protect their religion, but today are undeservedly forgotten”, the Mufti of Tatarstan summarized. 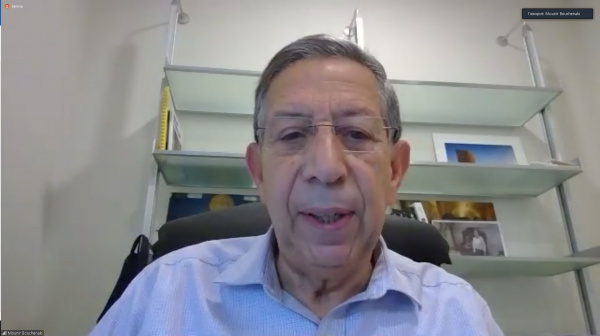 Mounir Bouchenaki, Special Advisor to the Director General of the International Centre for the Study of the Preservation and Restoration of Cultural Property (ICCROM), ICOMOS expert, Director of the Arab Regional Centre for World Heritage, supported Mufti and also spoke about the importance of preservation, recognition and popularization of the rich Islamic heritage. In his speech, he highlighted the success already achieved in this direction and elaborated on the fact that the declaration of the 18th November as the International Day of Islamic Art was the recognition of its contribution to the civilization development. “Let me remind you that Bahrain initiated the celebration of the International Day of Islamic Art on 18 November 2018.During the regular session of UNESCO, this initiative was supported, which meant not only the recognition of the contribution of Islamic Art to the development of world civilization, but also the celebration of cultural diversity. Unfortunately, due to the pandemic, some part of the events had to be reduced, but I hope that we have managed to convey the message that Islamic culture is a constantly evolving phenomenon that is not limited by geography. It has absorbed all the different trends of peoples united by the Islamic religion”, the expert noted, stressing once again that Islam welcomed and celebrated diversity, understanding and mutual respect.