The Group of Strategic Vision (GSV) "Russia - Islamic World" considers discussion of topical problems of the Islamic world in various forums among the priority tasks in 2021-2022. The statement was made by the Deputy Chairman of the Federation Council Committee on International Affairs and Deputy Chairman of the Group, Farit Mukhametshin, speaking at a meeting between the Group leaders and ambassadors of the Organization of Islamic Cooperation (OIC).

The central event of this year, according to him, is a visiting meeting of the GSV, which is to be held in October in Saudi Jeddah. The theme of the event is: "Russia and the Islamic World: Dialogue and Cooperation Prospects".

Among other important priorities of the year is deepening contacts with Central Asian states, taking into account the tasks of combating extremist trends in Islam and strengthening cooperation in the field of education, culture and spiritual relations.

In fall in Tashkent together with the Religious Board of Muslims of Russia, it is planned to hold an international conference with the agenda "Spiritual silk road: civilization heritage in the space of dialogue and good neighborliness".

Also, it is planned to hold a series of events timed to the preparation and holding of the World Conference on Inter-religious and Inter-ethnic Dialogue in May 2022 in Russia.

"We will continue to expand our international ties this year; in addition to the already traditional events, we will organize new ones, including a broad access to direct contacts with national organizations of the Islamic world," Farit Mukhametshin concluded. 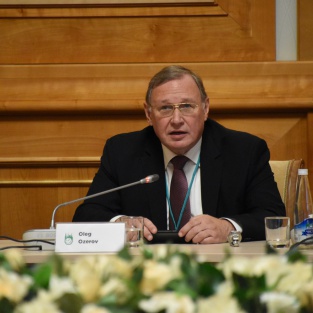 Ozerov: The Group is successfully working to develop relations with the Islamic world
27 May