Timur Shafir: journalism in the Islamic world is extremely diverse

"Journalism in the Islamic world is extremely diverse and varied not only from the geographical and cultural point of views but also from the point of view of the processes taking place in the world," he stressed, adding that the mass media also face a number of serious challenges.

"These are both technological processes and so-called new media, which have a significant impact on developments in the Islamic world and its journalism," the expert said.

The conference "Russia-Islamic World: Crossroads of Information Cooperation" is supported by the Permanent Mission of the Russian Federation to the Organization of Islamic Cooperation (OIC), the Union of OIC News Agencies and the Russian Union of Journalists.

The main topics for discussion are the prospects for cooperation between OIC countries and the Russian Federation in the media sphere, plans for potential cooperation with the involvement of interested organizations and agencies, as well as the creation of a practical platform for regular meetings of information specialists on the basis of the Group of Strategic Vision.

The event is held in preparation for the VI International Forum of Muslim Journalists and Bloggers, which the GSV "Russia-Islamic World" plans to hold in 2021 in an online format. The previous forum was held in 2019 in St. Petersburg and focused on the impact of media on public opinion. 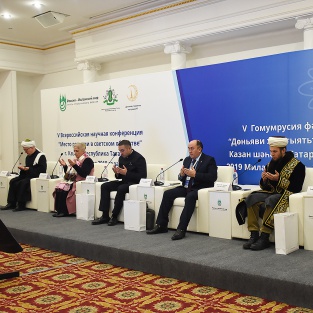